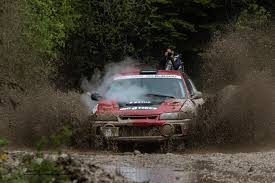 The team showed up with the Valley Mitsubishi Evo 4 hoping to have found and fixed the gremlins since their mechanical DNF at the earlier Rocky Mountain Rally in Invermere.

Their hopes were short-lived as problems mounted, not just for them, but for many teams in the event.

The national series rally, hosted in Merritt BC just happened to be scheduled on a weekend that heralded an early return to winter in British Columbia and the big question was what tires to use.

Jennings-Bates, however, had an ace in the hole with a set of mud tires mounted on rims that came with the pre-owned car he purchased. “They were the perfect tire for the event” said Jennings-Bates adding
“Just prior to the start I asked the service crew to put the mud tires on, they could cut through the fresh snow and would find grip on the gravel below”.

Shortly after that he was advised that the rims had the wrong “offset” and the mud tires were interfering with the suspension which would spell trouble on the stages. As a result, like many teams, they had no choice but to run gravel tires all weekend that are perilously slippy in deep snow and mud.

The event started slow for the team with Jennings-Bates frustrated by his pace on the first two night stages. Under pressure to climb the ladder, he was able to close the evening with a top ten finish after
four stages.

With the team chasing various issues in the car, many hours of work went into solving problems during the evening. Ready for a fresh start and ready to push the team arrived early in the morning to find the car had developed clutch issues. In reality, a major clutch component had failed and parts for an Evo 4 are not readily available.

“With the adage of never give up in our minds I looked around for another Evo that belonged to a volunteer for another team and we’re fortunate enough to find the owner who agreed to let us steal apart from his car until the end of the day,” said driver Mark Jennings-Bates.

With that, the team was back in the hunt after missing two stages in the morning due to the clutch issue.

Fighting back during the rest of the day saw the team claiming top 7 spots in the next two stages and finishing the very snowy and slippy last stage “Spius” with a top 6 times overall having had to run the last twelve minutes without any rally lights.

Shortly after the event the team also found out that co-driver Jackie Jennings-Bates had unknowingly run the event with a detached retina which required emergency surgery as soon as they arrived home.

Expect to see the team running the full Western Canada rally series next year and fighting for a top position in the series.

Behind The Wheel – Wheel Alignments