Ready To Get Ready 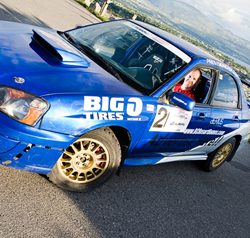 Last year’s season was disappointing but, just like running a business, we win or we learn.

For Jackie and I the season was starting with a bang with an entry in to Rocky Mountain Rally in May of 2018. With everything ready to go and a car with a US log book (which we were told would qualify us for entry in to Canadian races), the technical director visited our house to look at the car.

That was when plans started to unfold.

We had been sending out some media updates and preparing Jackie for her first opportunity to race in the co-drivers seat but other plans were afoot.

The Technical Director indicated there was something about the roll cage he did not like. He could not pin it down and the log book showed the car had entered almost 15 events as is and would have passed technical inspection each time. But he “felt” something was amiss.

I was left with some homework, find out who installed the cage and how? The car came with little paperwork and what we were able to find out is that it was EVO 4 #22 off the production line in Japan and was a stripped down bare shell that was sold for upgrade to a Group A spec EVO rally car. I spoke to a few people who may have been familiar with it but nobody could corroborate the history. In the end we had to pull out of Rocky Mountain Rally.

We were able to recce almost all of the stages which was invaluable experience for Jackie and great for us to see the stages. I quickly looked around to order a pre-manufactured cage in the UK after talking to a very well qualified welder in Kaslo.

I told the cage company that my next objective was Pacific Forest Rally in September so I needed the cage to be shipped in June. They indicated no problem.

I was suspicious in the middle of June and after having paid several thousand dollars I called to see if it has shipped. I was advised that it was scheduled for the end of September.

This really was no different to running a business. The client is waiting to have the tires fitted that did not arrive at your store. You know you can’t quit, but what is the solution.

For me I canceled the order and went to another company. I ordered a similar cage online. The next day I received a call to say the cage I ordered was no longer available and the only other cage that fit my car was twice the price! I ordered on the proviso that I would have it by August 14th and if not they could refund my money. As luck would have it, I was in the UK the first week of August so I dropped by the factory and everything seemed to be on track.

The cage shipped ready for an August 14 delivery. It arrived in Canada a few days later and stayed in Vancouver for three weeks. Nobody could answer why? I could not move it and I was aggravated that now I would be canceling the PFR entry which is my favourite event.

Eventually in September a new cage was in our hands.

The only issue now was that my welder and his wife were having a very challenging pregnancy and had to move the Vancouver in preparation for the birth of their new child.

We had three months to get ready for the final event of the year – Big White Rally in Kelowna. Jackie now had a few events of recce under her belt and we were excited.

My welder’s baby was born and as expected was a very sick little baby with an extremely rare disease. He and his wife lived in Vancouver looking after the baby with critical care nurses. For a few months the little baby shared time with doting new parents who struggled with decisions that are some of the most difficult anybody will have to make.

I told the young couple not to be concerned by the cage install and naturally to focus on helping their baby Ava.

Sadly Ava never lived through to the end of the year. Her race ended far too quickly.

My welder and his wife are doing extremely well and have coped with a tragic situation very maturely. The old cage is out of the car and the new one is being installed.

What we did find, which is what the technical director had “felt” was that the original cage was badly installed and only partially welded with putty put on to look like weld in some areas. Additionally some of the cross members were a much thinner wall than was technically required. It was an illegal and dangerous cage.

Since my wife is sitting in the co-driver’s seat I was happy to get to the bottom of it and we will now have a rather expensive but safe FIA approved rally cage installed for Rocky Mountain Rally in May! See you there.