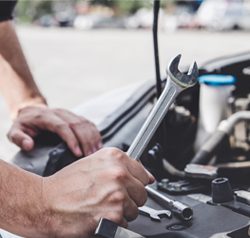 Big O Tires Rally Driver Mark Jennings-Bates recently experienced a setback during a race. His experience reminded him of the importance of routine maintenance.

Sitting on the side of the road with my car in the ditch I asked my wife why we had not made it a priority to check the car over in more detail before we started.

For us, the circumstance was a little different than many of you reading this. We had entered the second round of the Canadian national rally championship, The Rocky Mountain Rally in Invermere BC.

As always, with events like this, it was a crazy frenetic two weeks before the rally. Frankly it was as if the car was in boxes several days before the event and we had to put it back together after receiving approvals to compete.

We had noticed some wear and tear on parts and had ordered them but sadly they did not arrive so we were forced to make the best of a bad situation.

Ordinarily we probably would have finished the event except for one new stage, Steam Clock that was brutally rough and brought an end to the rally for several competitors, us included.

The stages were muddy and deep water bars were a common hazard but to tackle them at 100kph or 10kph was the question. The theory was that we could sail over them if we went quickly. The resulting effort led to a some serious destruction on the car including a broken sway bar link, broken valve on the suspension and a broken tie rod end.

The tie rod end finished us off completely and not very tidily. On the exit to an uphill hairpin I was hard on the gas when the passenger side tie rod end released and the car steered us over a very steep bank.

Nobody was hurt other than our pride and frankly, we had had a good event up to that point – we live to fight another day.

You see the difference is I race with a complete roll cage. If something goes wrong, my car can get damaged but I stand a very good chance of not even getting a bruise. In a regular street car or truck however, that is not the case.

On a major highway, any of the above problems could cause you to veer in to oncoming traffic with a potential collision speed of 200kph. That is not something I am willing to put my family through.

So while the summer driving seems like a breeze compared to the rest of the year in Canada, it is a good time to take your car off the road for a day and visit your local BigO dealer to give your car a thorough check. Preventive maintenance can save not only a lot of money, it can save a life.

The Importance Of A Spring Service